The fifth annual Guanajuato Nights fundraiser on 9 November 2019 was again a big success! With ticket sales, raffle, silent auction, and live auction, the event had gross receipts of around $18,000. Frances “Faffie” Siekman de Romero, long-time friend of the Amigo Club and supporter of the sister-city relationship, contributed generously to the scholarship fund by matching the Amigo Club’s receipts. These funds will help support students from Southern Oregon University (SOU) who wish to study at the University of Guanajuato, and vice versa. Although Faffie was unable to be in Ashland this year, she was with us in spirit.

Unless otherwise indicated, photos below were taken by Jay Ach, Amigo Club Board Member-at-large. 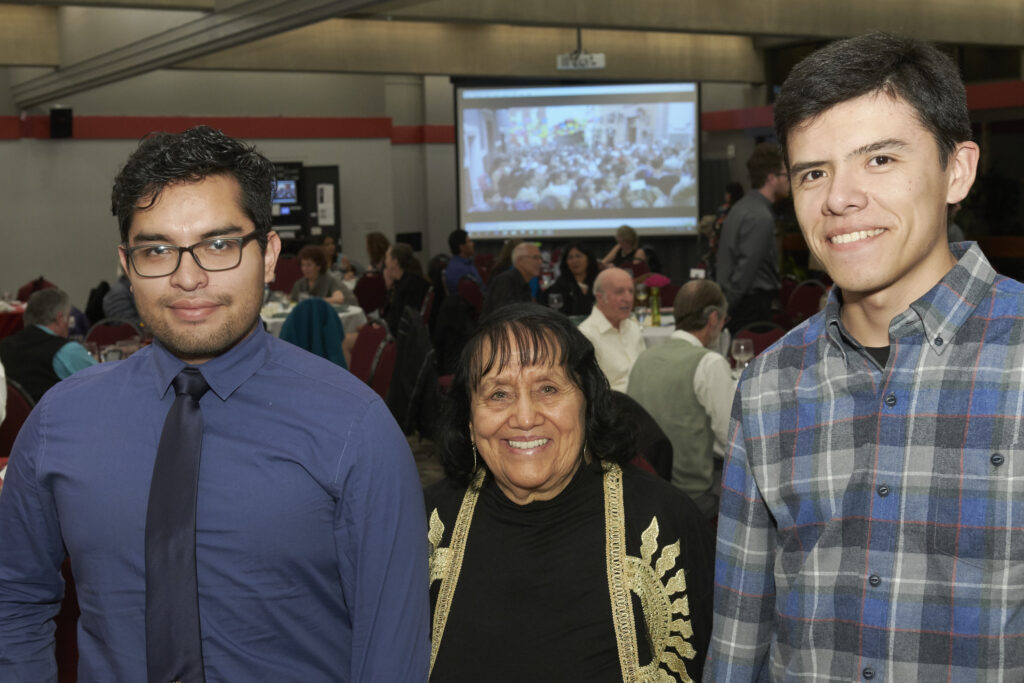 Señora Chela Tapp-Kocks stands between two students from the University of Guanajuato who are currently studying at SOU with the help of grants from the Amigo Club scholarship fund: Saul Isaac Sanchez Flores (on the left) and Francisco Javier Landin Cabrera (on the right). In the background is a video of the 50th anniversary celebration in May, when children in Guanajuato accompanied Ashland visitors along a city street.

Jay Tapp and Gaby view silent auction items that included original art by Loreta, the Guanajuatan artist who designed and painted the mural of Guanajuato that can be viewed on Calle Guanajuato in Ashland. Jay Tapp volunteered as auctioneer for the live auction items later on in the evening. 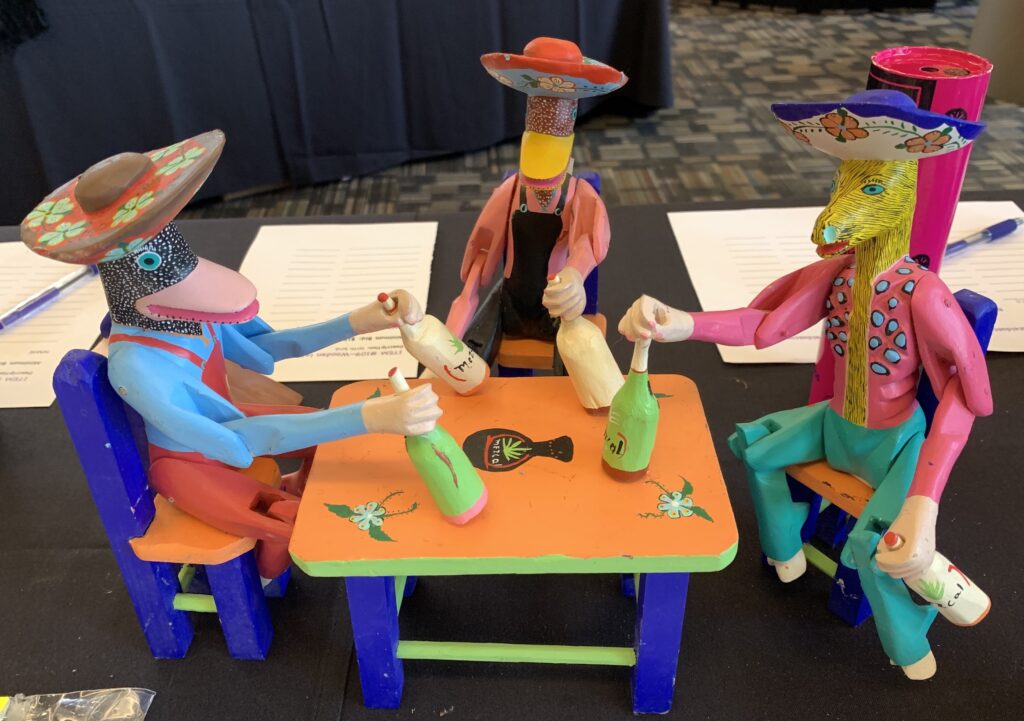 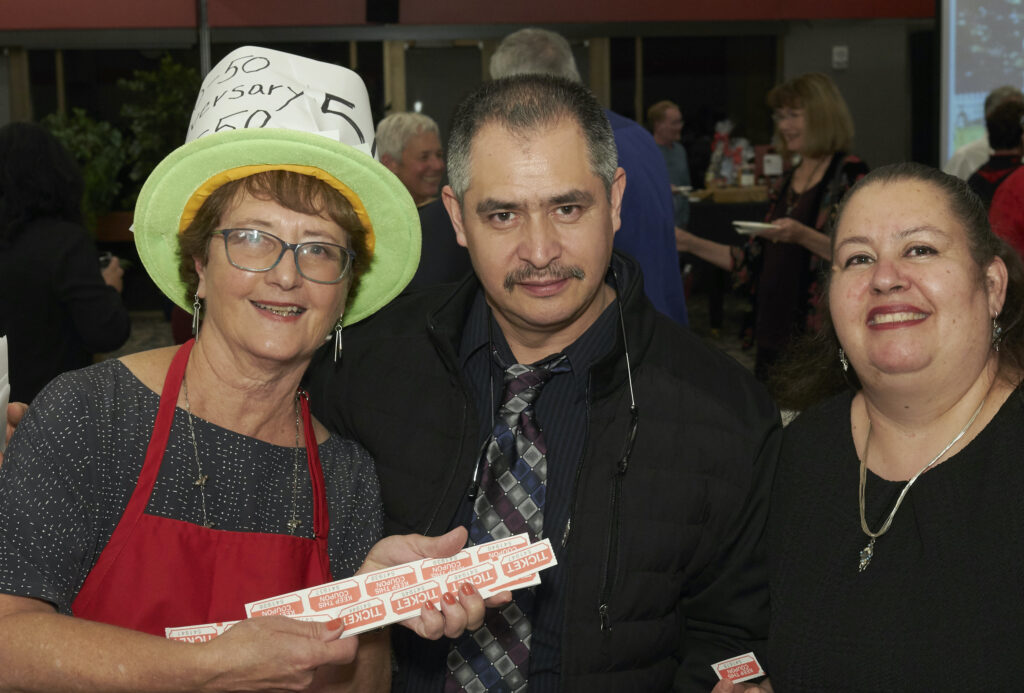 During the silent auction, Amy Lepon sold raffle tickets to attendees, including Ramiro and Beatriz Padilla. Half of the raffle amount collected is given to the winner and the other half is added to the scholarship fund. 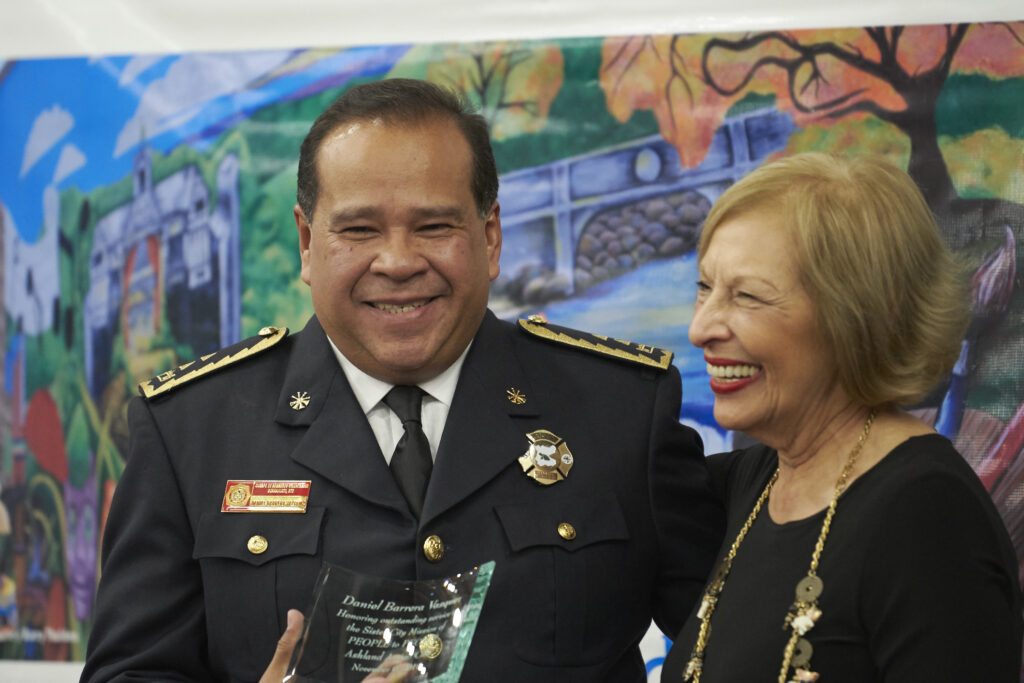 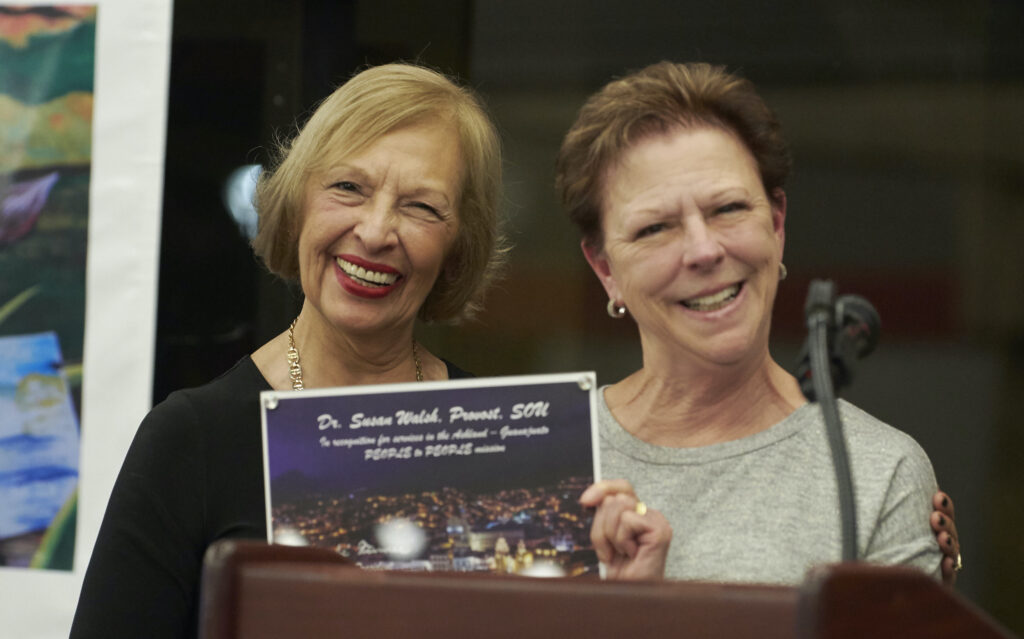 SOU Provost Dr. Susan Walsh received an award for helping revitalize the Amistad Program for student exchanges, and representing the university in many sister-city activities. 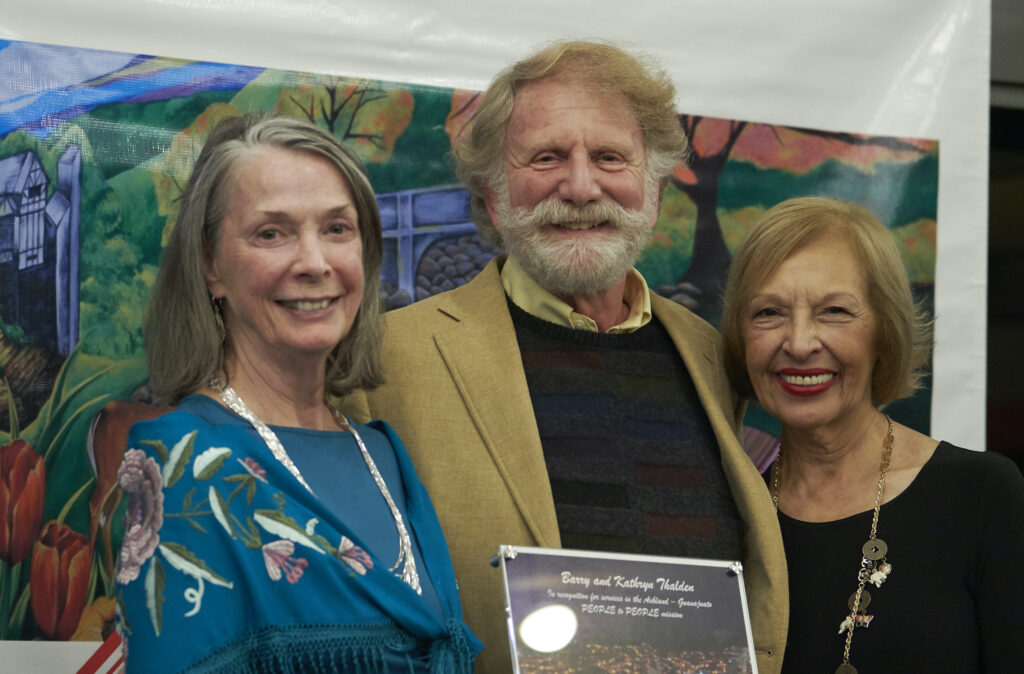 Kathyrn and Barry Thalden received an award for having the rare vision and patience to work with Ashland and Guanajuato to create official artistic murals in both cities. 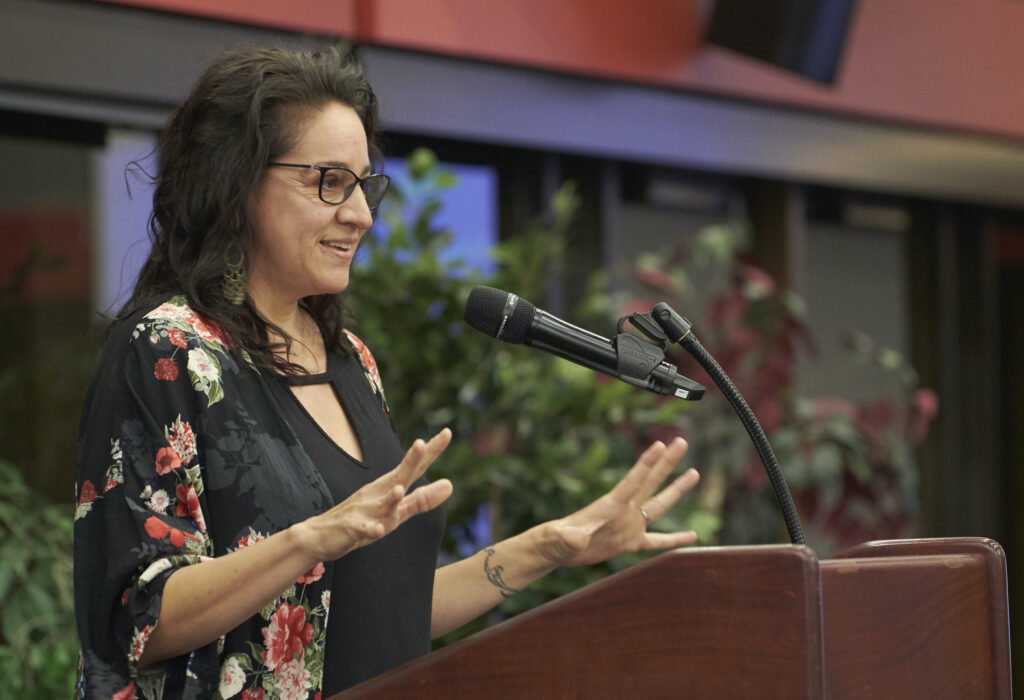 Denise Baxter, an Ashland artist, received an award for giving the people of Guanajuato an artistic vision of Ashland by designing and painting a mural on a prominent street in Guanajuato. Loreta, the Guanajuato artist who painted the mural in Ashland, was unable to attend the event. 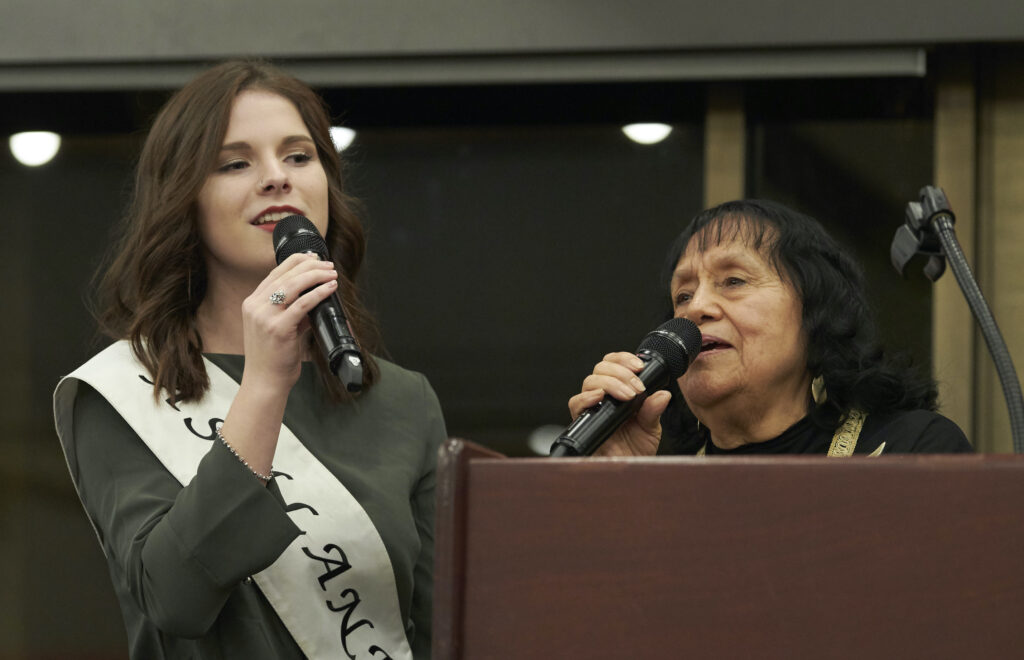 Taiga Sherman, this year’s Ashland High School ambassador to Guanajuato performed several songs, including a duet with Señora Chela. The second ambassador, Aubrey Reynolds, was unable to attend the event. 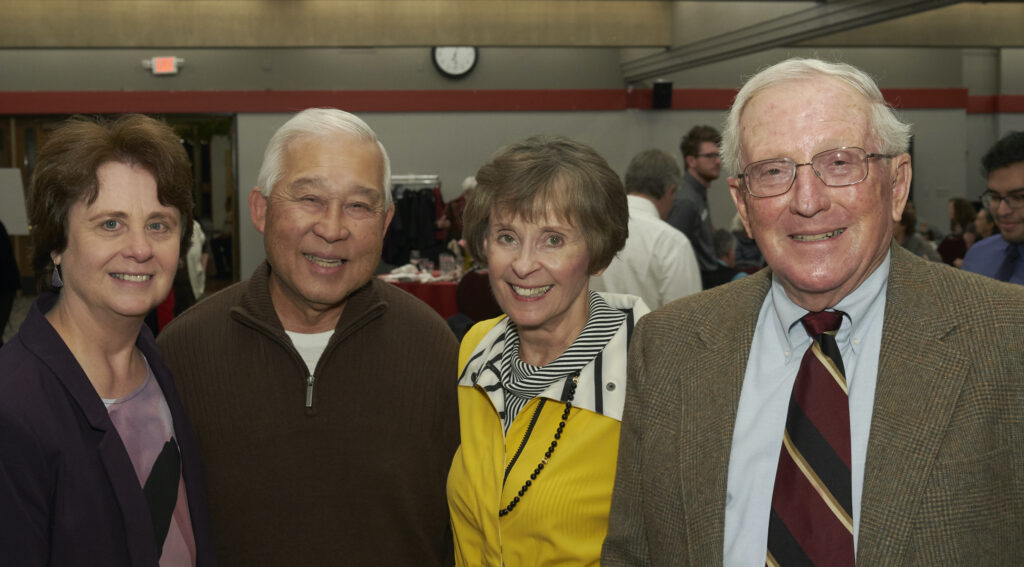 SOU presidents are essential supporters of the Amigo Club and Amistad Program that promotes the exchange of students between SOU and the University of Guanajuato. Four current and past SOU presidents attended the fundraiser: current president Linda Schott and past presidents Roy Saigo, Elizabeth Zinser, and Joseph Cox. 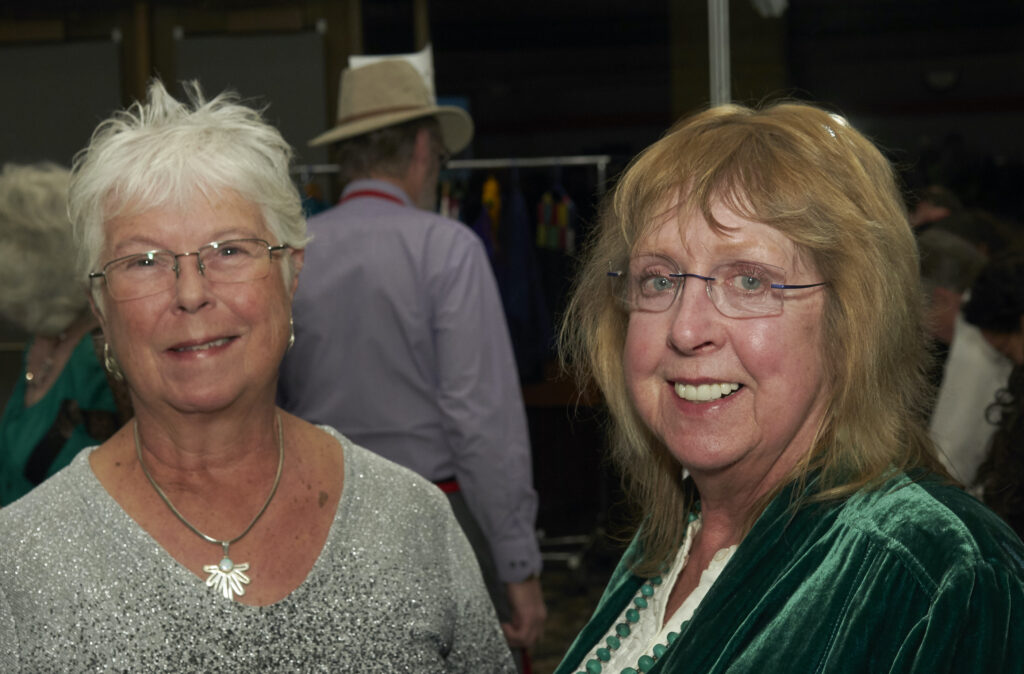 Two attendees who have been long-time supporters of the Amigo Club and its varied activities: Victoria “Snow” Mountain and Marti Fabian Krause. 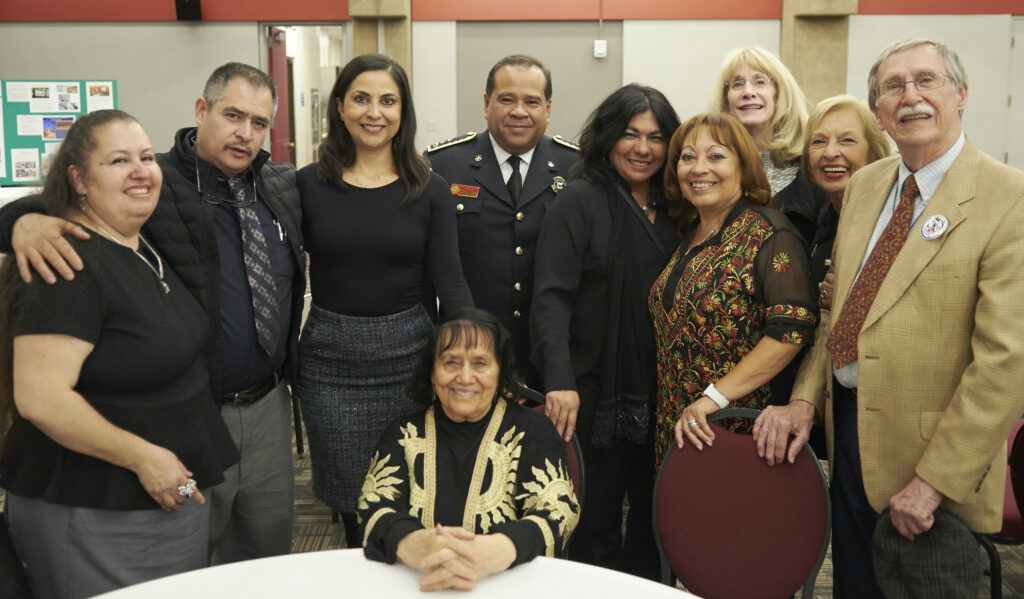