The 46th Festival International Cervantino occurred in Guanajuato from 10–28 October. This three-week festival is considered to be Latin America’s biggest celebration of the arts. Although it started as an homage to Miguel de Cervantes, it now includes all types of artistic creations—dance, music, film, theater, visual arts and more. Each year, Guanajuato welcomes thousands of artists and performers from countries around the world. To see events that occurred in 2018, and to see the schedule that will be posted next year for the 2019 festival, go to https://www.festivalcervantino.gob.mx/. 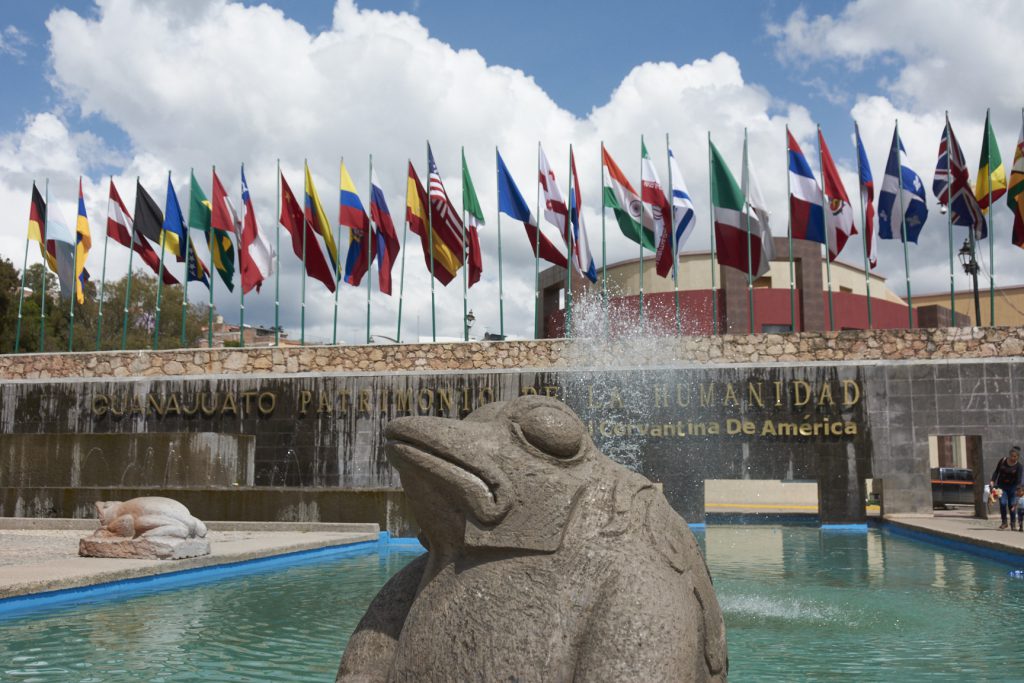 La Plaza da las Ranas (frog plaza) advertises the international flavor of Guanajuato—Patrimonia de la Humanidad and Capital Cervantino de América. Frogs are a symbol of Guanajuato; the valley must have been filled with frogs before the construction of city buildings. (Photo by Jay Ach.) 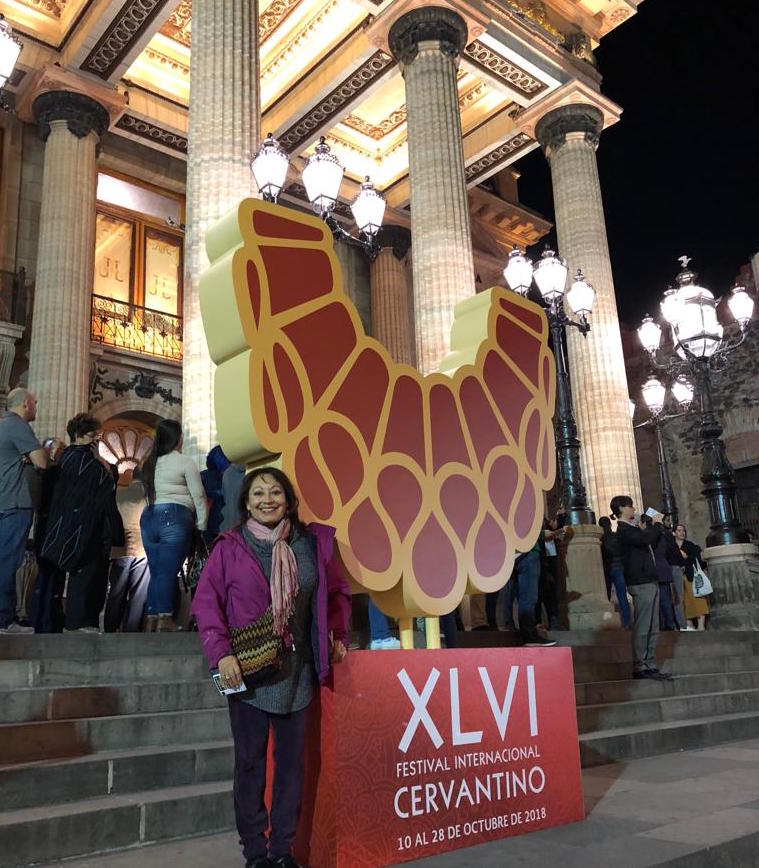 Two Amigo Club board members visited Guanajuato this year during the Cervantino. Here board member Marina Kendig stands in front of Teatro Juarez, a lavish theater built between 1873 and 1903 by the dictator Porforio Díaz that was the site of many musical events. (Photo courtesy of Marina.) 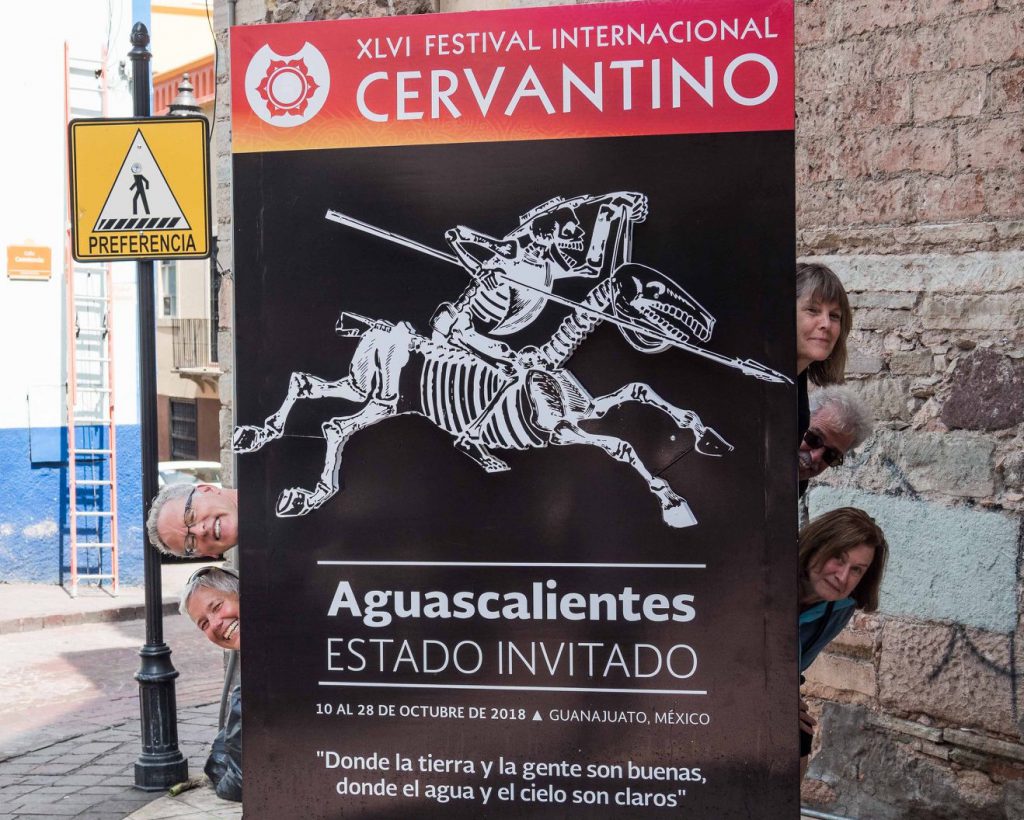 Each year the festival has a special “invited country” that in 2018 was India, who provided bollywood music among many other art forms. Each year the festival also has an “invited state” of Mexico that in 2018 was Aquascalientes. Board member Karen Grove is on the lower left, with her husband Jay Ach above. On the right side are (lower to upper) Lynne and David Frevert, Lisa Lane. (Photo by Tim Lane.) 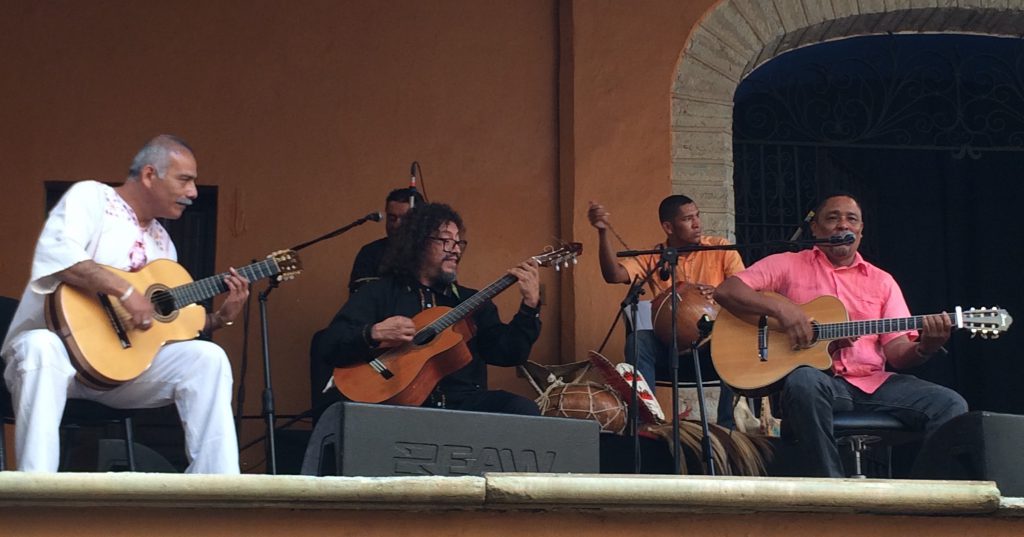 The musical genres and the venues are wide ranging. A favorite Mexican group was Chogo Prudente from Oaxaca (Chogo is in the pink shirt—look him up on YouTube!), who performed at the Exhaciendo San Gabriel de Barrera, a hacienda that has been converted into a hotel with beautiful gardens.

A completely different type of music was provided by Mokoomba, a highly energetic band from Zimbabwe. Although they have played around the world, this was their first time in Mexico. They played in a large outdoor amphitheater next to the Museo Regional de Guanajuato Alhóndiga de Granaditas. (Photo by Tim Lane.)

During the week leading up to the festival, various art works began appearing in the streets. This fanciful statue in the Plaza del Baratillo was a particular favorite for people of all ages. 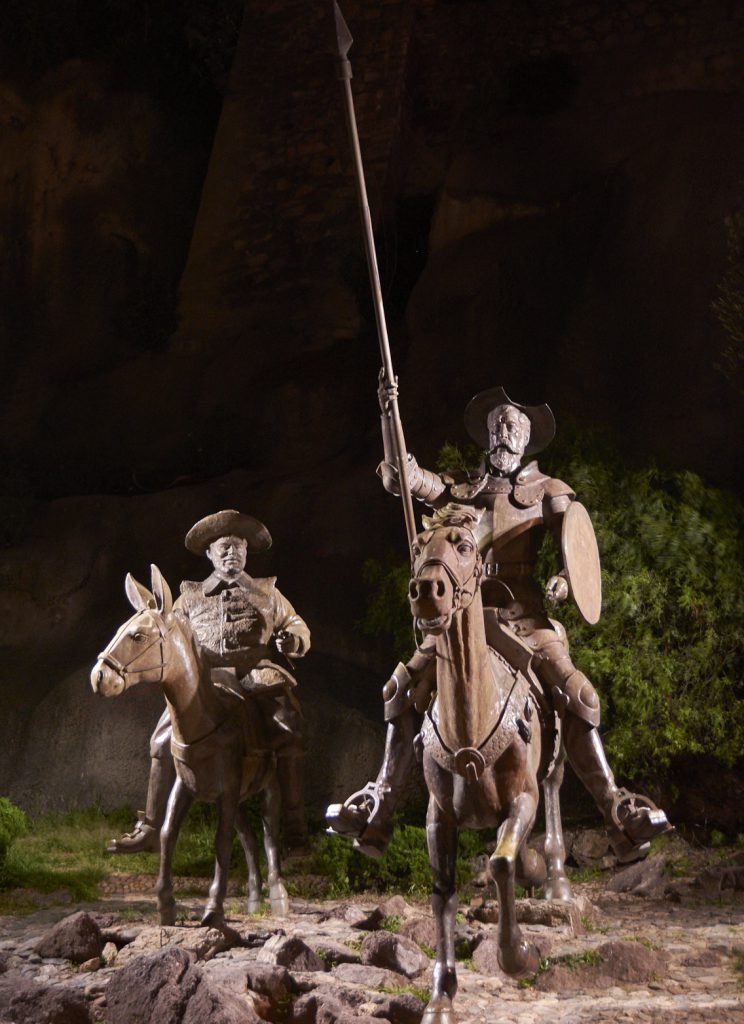 Guanajuato even has a museum devoted to Don Quixote—Museo Iconográfico del Quijote. It contains many images of Quixote, all done in different styles from realistic to highly abstract. The museum was funded by Don Eulalio Ferrer, a Spaniard who became interested in Don Quixote while in a concentration camp during the Spanish civil war. After immigrating to Mexico, he became a rich business man and began collecting art related to Don Quixote. He donated his collection to found the museum, whose collection continues to be expanded. (Photo from the museum by Jay Ach.) 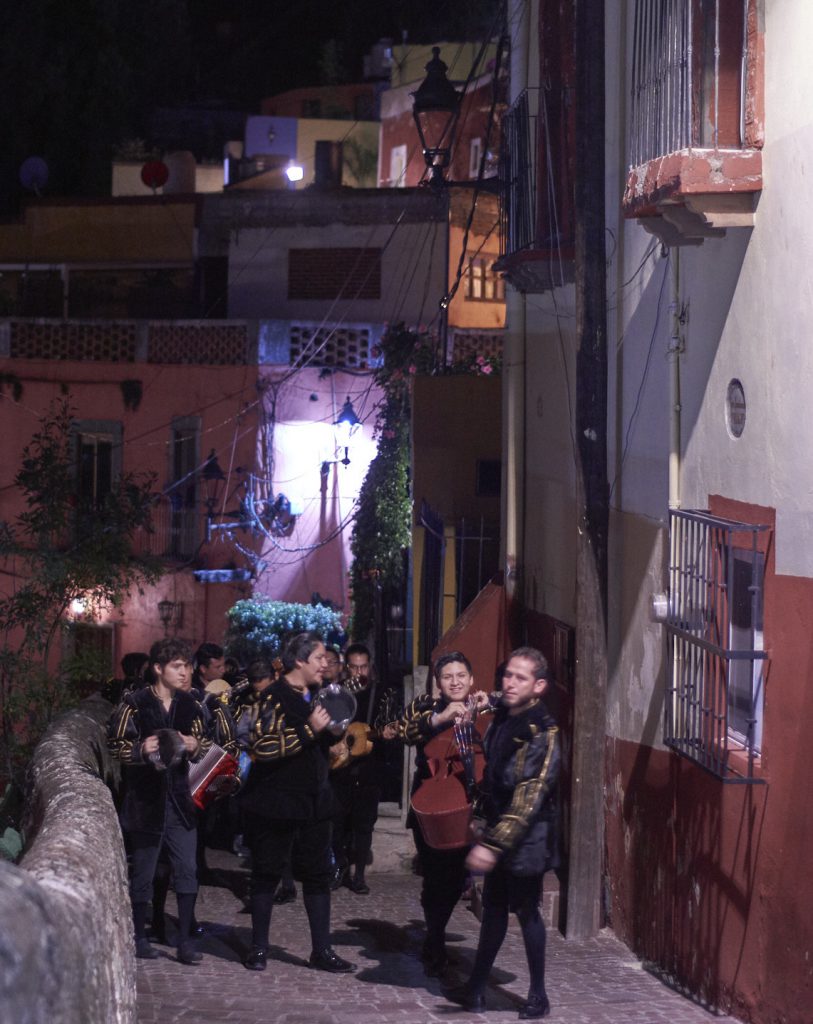 In addition to the events specifically scheduled by the Cervantino organizers, other artists are drawn to Guanajuato during the festival and can be found busking along the streets. And just as they do nearly every night of the year, local groups of musicians (called callejoneadas or estudiantinas) sing and play instruments as they walk through the narrow alleyways (callejones) followed by an enthusiastic throng. Callejoneadas are particularly well attended during the Cervantino, when many people are drawn to the city. Here the musicians are starting their transit through the alleyways after energizing their audience. (Photo by Jay Ach.) 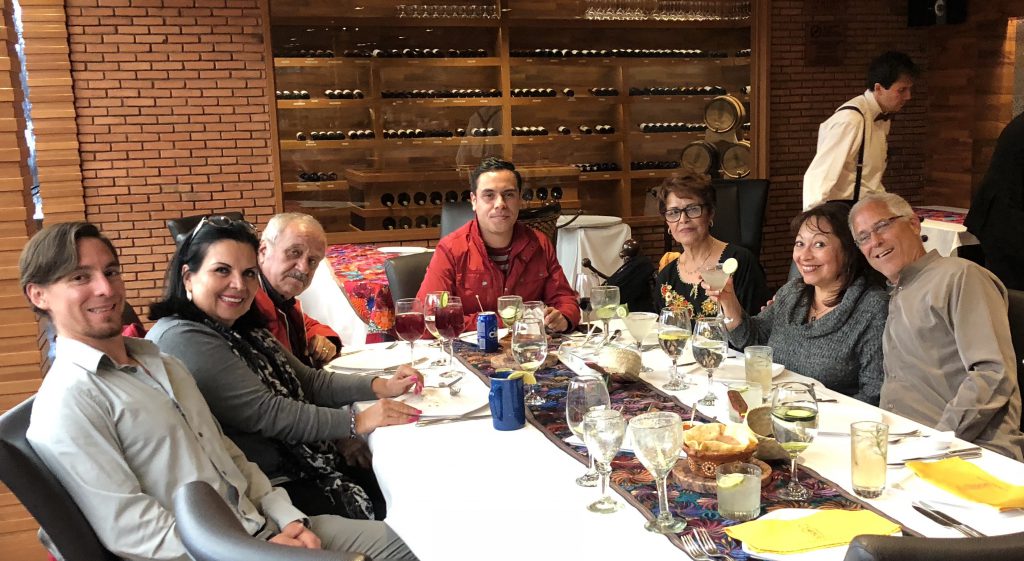 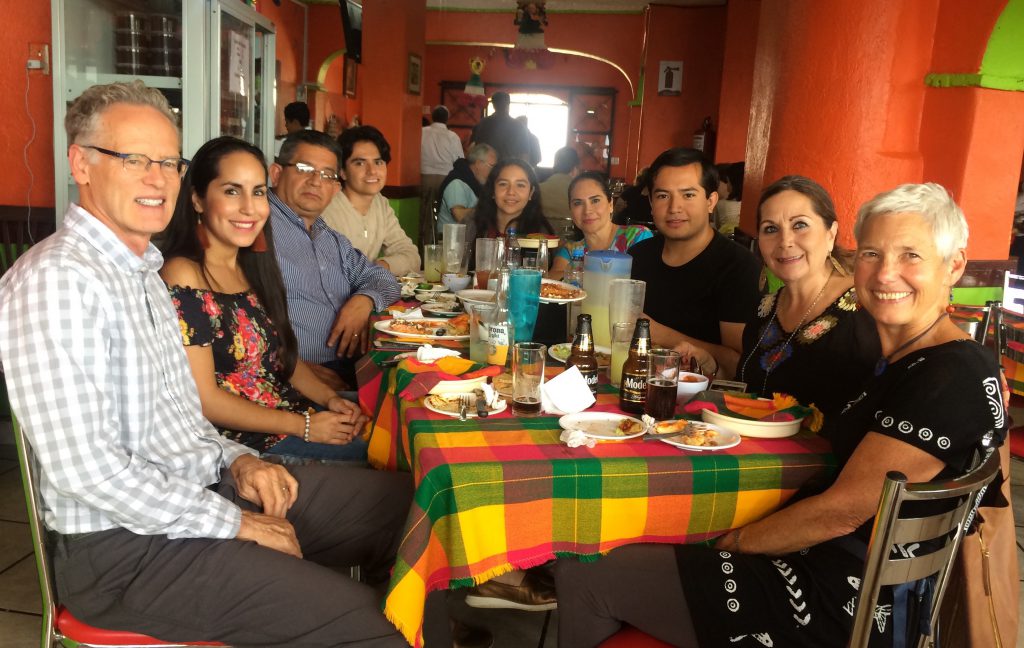 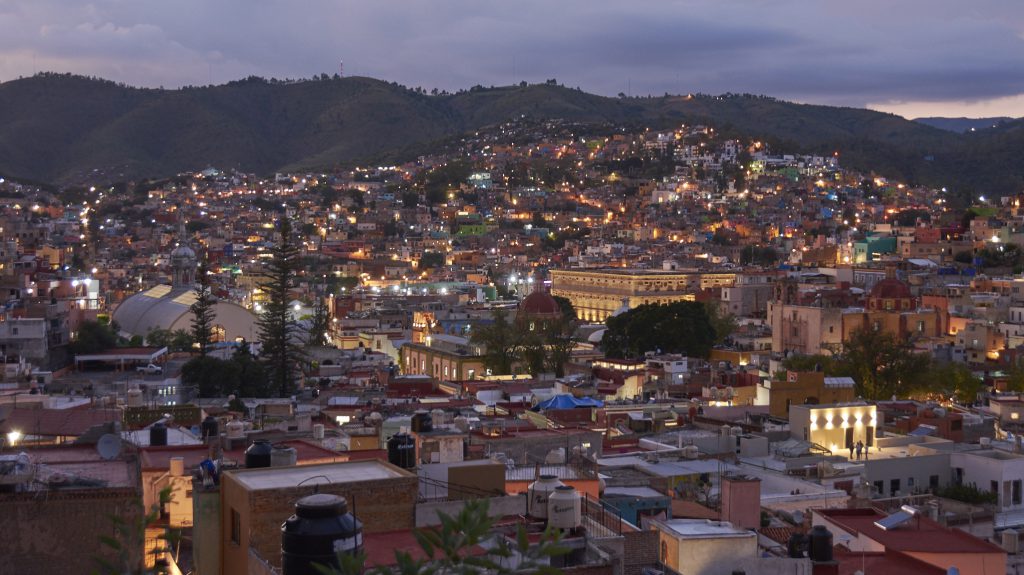 This tranquil image of Guanajuato at night belies the pulsing energy of the streets during the Cervantino festival. The party energy is palpable even before the festival begins, and the energy continues to build during the three weeks when events are flowing into the streets that are filled with relaxed and happy people. (Photo by Jay Ach.) 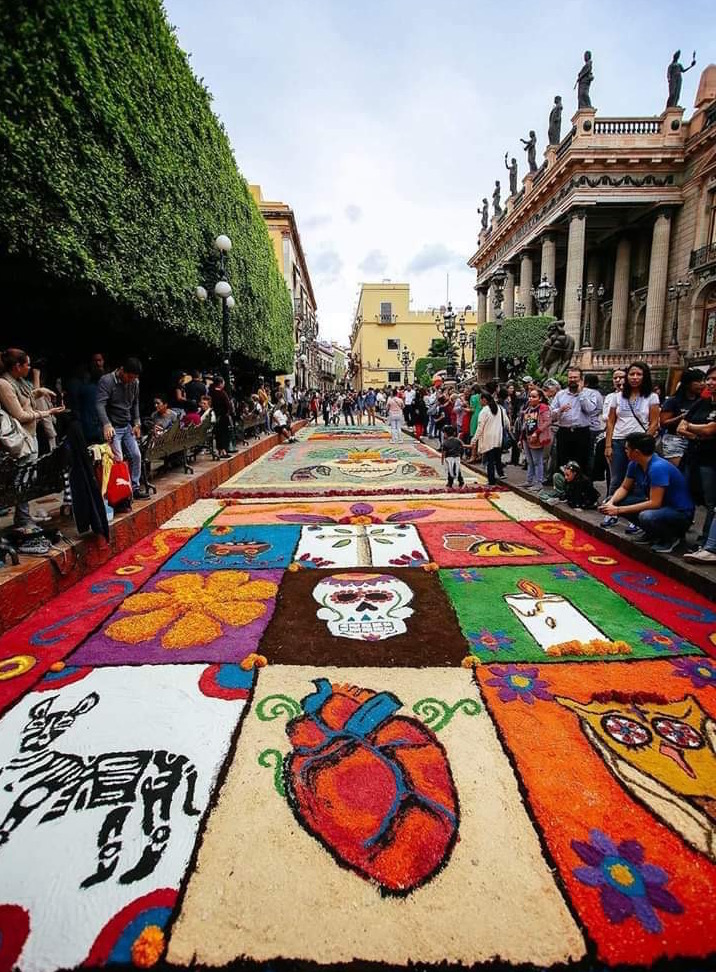 Marina and her family stayed long enough to enjoy Day of the Dead festivities during the first few days of November. Here is an example of the impressive art work created in the streets during this time. (Photo courtesy of Marina Kendig.) 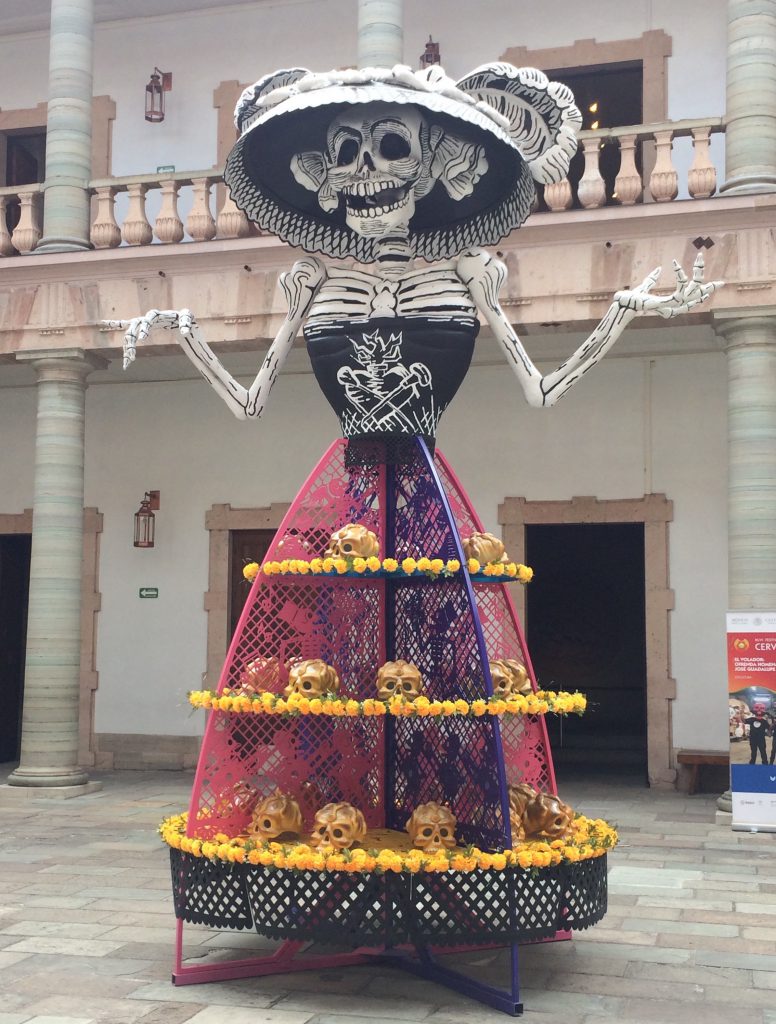 “La Catrina” is a classic image of Mexico and is based on the art of José Guadalupe Posada. During the Cervantino, this statue in El Museo Alhóndiga gave homage to the art of Posada. As part of the Day of the Dead festivities, groups design Catrinas for a competition in the streets. This year, Escuela Mexicana, who donated a week of study and lodging for 4 people to our Guanajuato Nights fundraiser, had the winning Catrina! You can see their entry by searching for their Facebook page.