Around 80 Ashlanders descended on Guanajuato from May 26–31 to celebrate the 50th anniversary of our sister-city relationship. Attending were representatives of the Amigo Club, Ashland city government, Chamber of Commerce, Rotary Club, firefighters, among other interest groups. Also in attendance were former Southern Oregon University (SOU) students who went to Guanajuato to study at the University of Guanajuato (UG) during the past 50 years, since the Amistad (friendship) Program was initiated at SOU. Some highlights of the week are presented below. Photos are by Karen Grove, unless otherwise indicated. 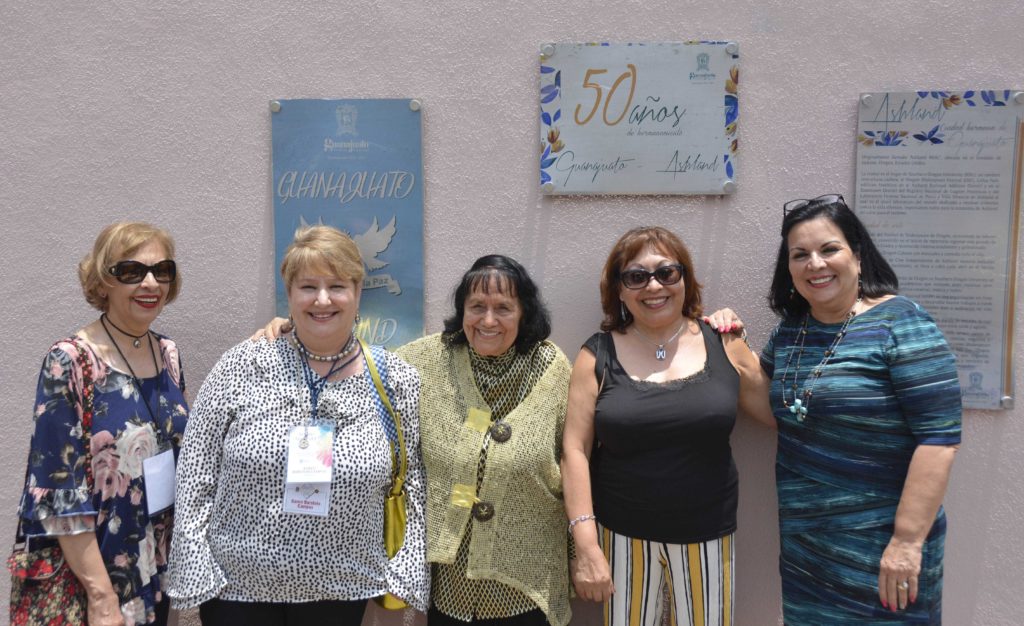 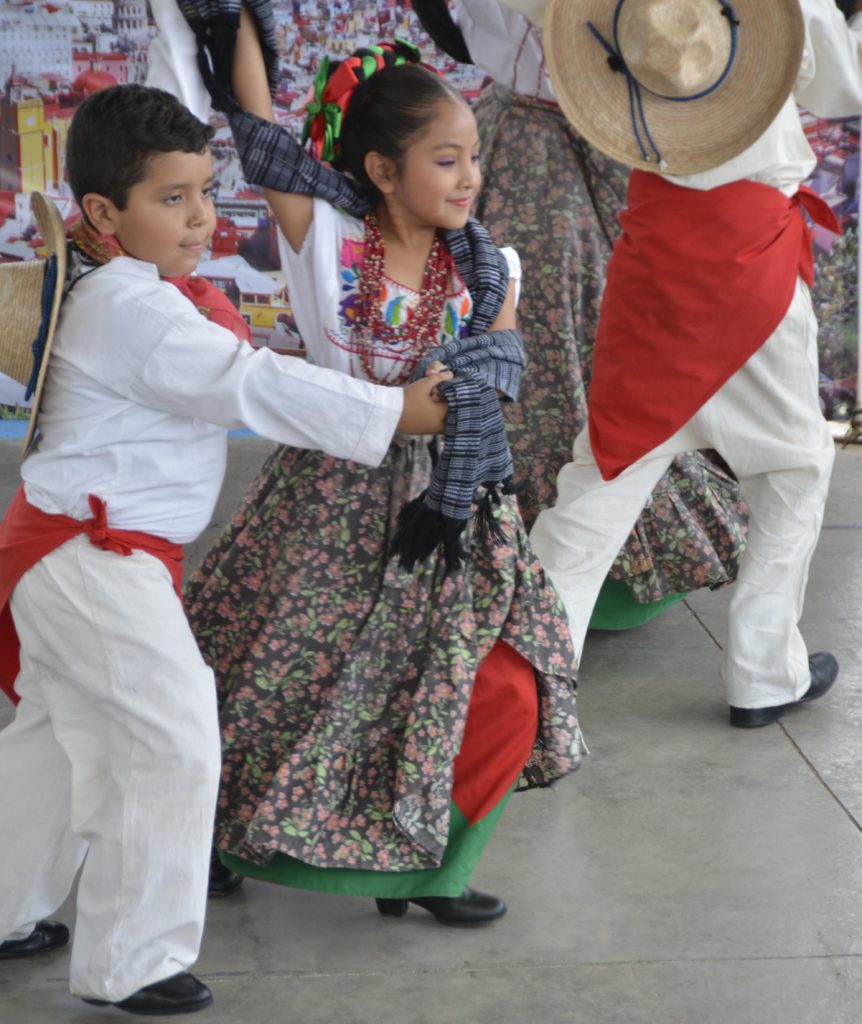 Included in the ceremony was a variety of folklorico songs and dances, presented with aplomb by groups of young people varying in age from around 6 to 16. [Photo by Jay Ach.]

On Monday evening, Ashlanders were treated to a dinner with a Mexican fiesta theme in Plaza San Fernando. Entertainment was provided by a group of folklorico dancers and the same group of estudiantinas who performed for Señora Chela Tapp-Kocks’ wedding in 1971, soon after she began traveling to Guanajuato and activated the sister-city relationship and the Amistad Program with student exchanges between SOU and the University of Guanajuato. Shown with Señora Chela (in Ashland scarf) are the estudiantinas, Stefani Seffinger (Ashland city councilor), Jay Tapp (Señora Chela’s son) and Clarissa Arrache (president of Guanajuato’s Amigo Club). 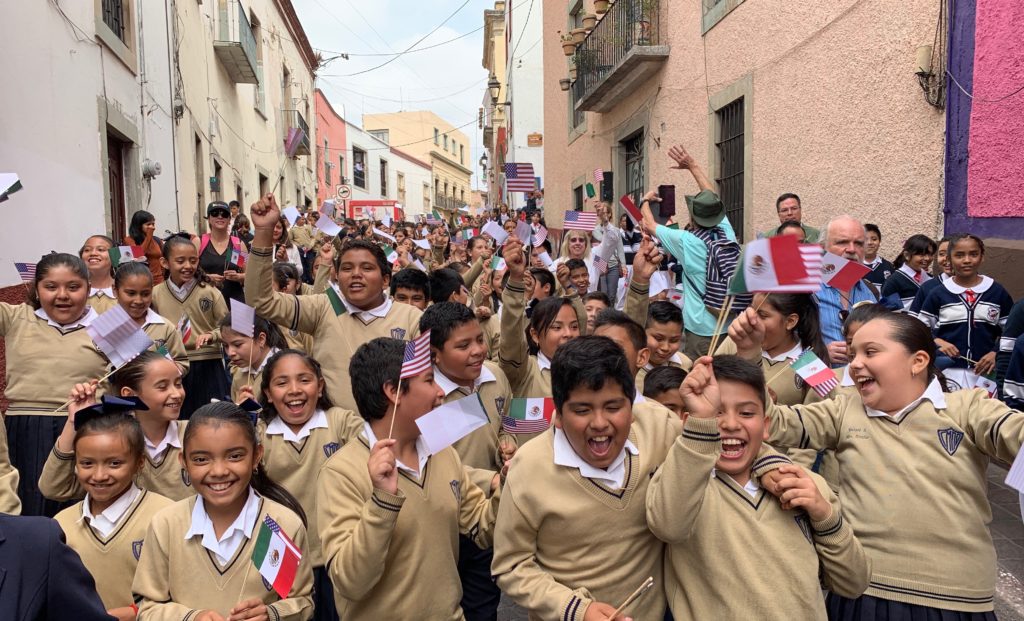 On Tuesday, after the formal lighting of a symbolic fire in the Alhondiga de Granaditas (where Day of Independence activities are celebrated the 28th of each month), hundreds of children lined Positos Street while Ashlanders paraded from the Alhondiga to the University of Guanajuato. They were waving U.S. and Mexican flags and, as neighbors across the border, we all felt a special shared sense of friendship. After we arrived at the University, we sat on the steps while various groups of students performed dances and songs, including “Oregon, my Oregon”, and “This land is your land…” in English! It was a deeply moving experience. 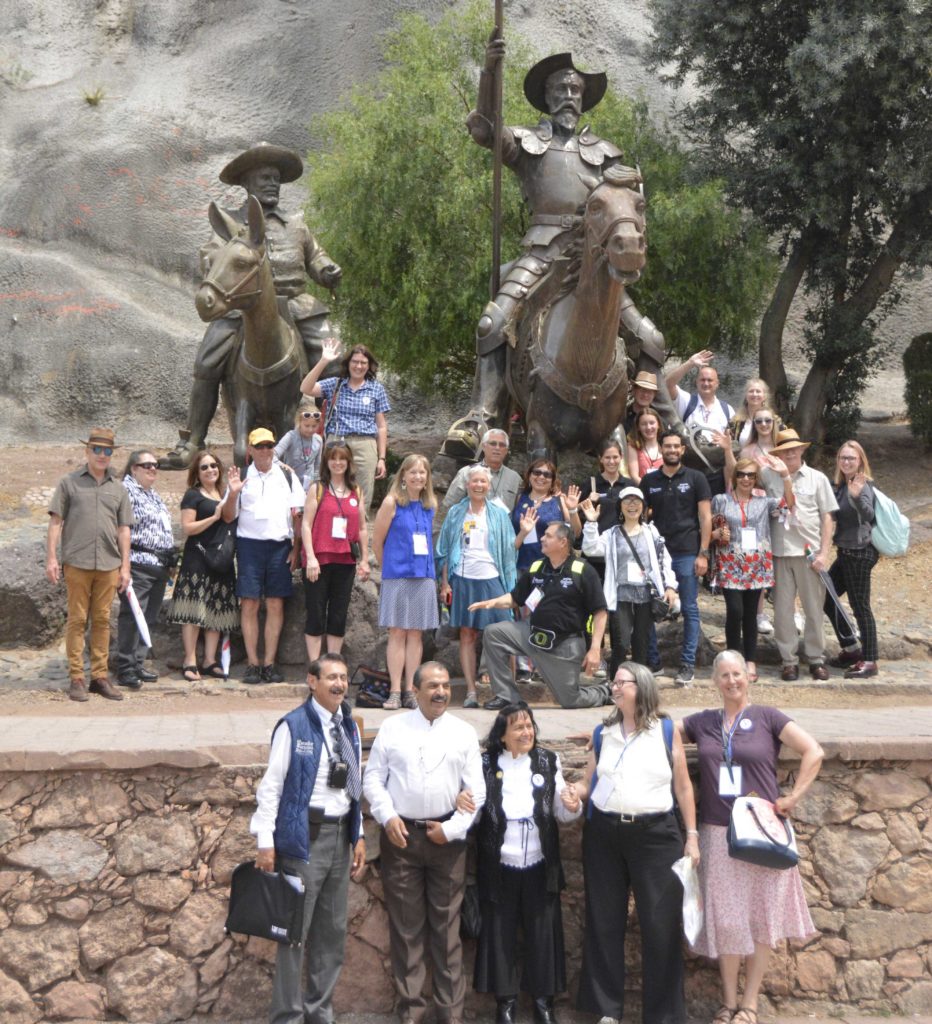 On Tuesday afternoon, many of the Ashlanders went on a city tour—we are here shown in Plaza Allende next to Teatro Cervantes and statues of Don Quixote and his sidekick Sancho Panza. The group continued on to the Museo Iconografico, which celebrates the affection Guanajuato feels for Cervantes and his celebrated book—”Don Quixote”. In the front row are the guide, Dr. Miguel Covarrubias, Señora Chela, Nancy Patzer, and Maggie Lander. Nancy and Maggie were among the first groups of students who traveled to Guanajuato with Señora Chela. [Photo by Jay Ach.] 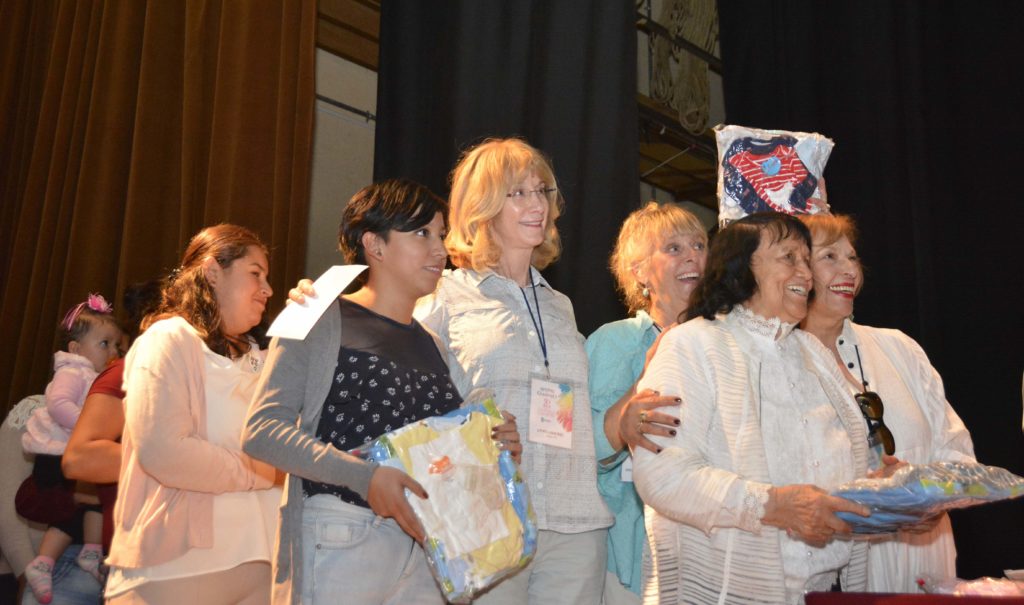 On Wednesday, the group went to the University of Guanajuato’s School of Mines, where geology and engineering students are trained to find and produce the economically valuable elements (mainly silver) that have been key to the city’s wealth. Three members of Ashland’s Amigo Club—Marti Fabian-Krause (not shown in photo), Suzanne Haveman, and Lynn Lamoree—created 100 baby packets to donate to pregnant women who are wives of men who work in the mines. Also shown in the photo are Señora Chela, Mina Turner (Amigo Club President), and several of the women who received the donated baby packets. The Amigo Club would appreciate any donations to help defray the cost of these charitable donations (to donate, please go to the DONATION page). [Photo by Jay Ach.] 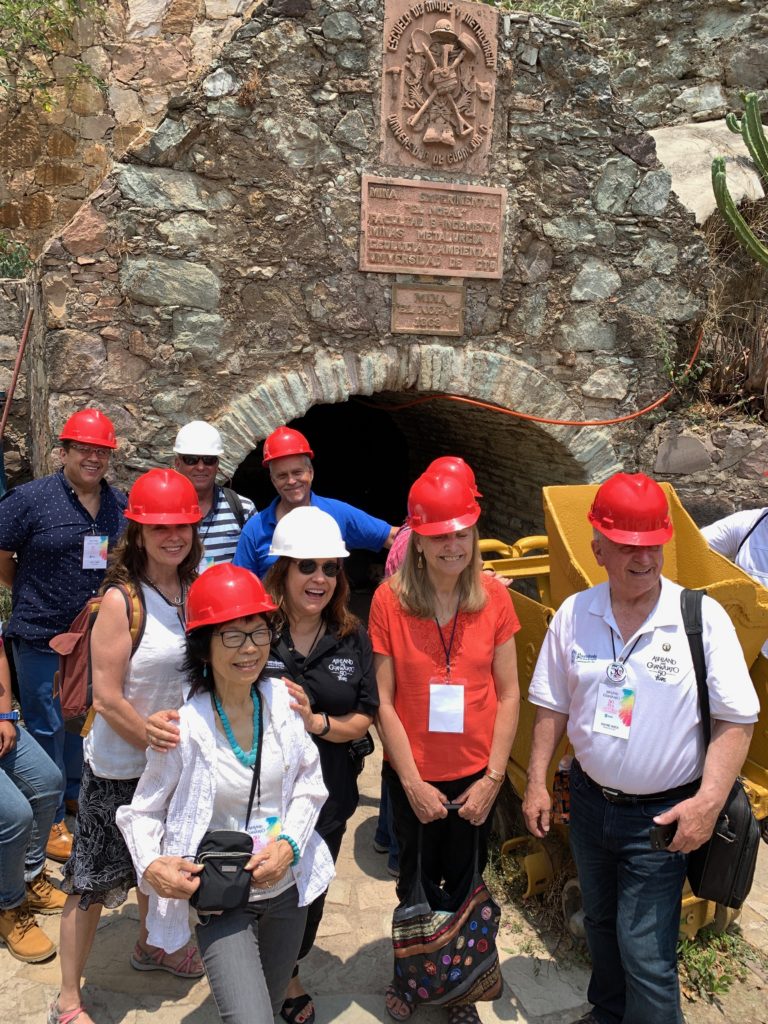 While at the School of Mines, Ashlanders visited the Mineralogy Museum, with its thousands of rock samples, and the Nopal Mine, where students learn about the mining process. Two university students guided us through several mine shafts where we learned about mining techniques and saw the “mother vein” that yields the valuable silver and other metals. These Ashlanders at the mouth of the mine are: Jay Tapp, Larry Jones, John Enders, Diane del Rio, Virginia Silbowitz, Juli DiChiro, and David Wick. 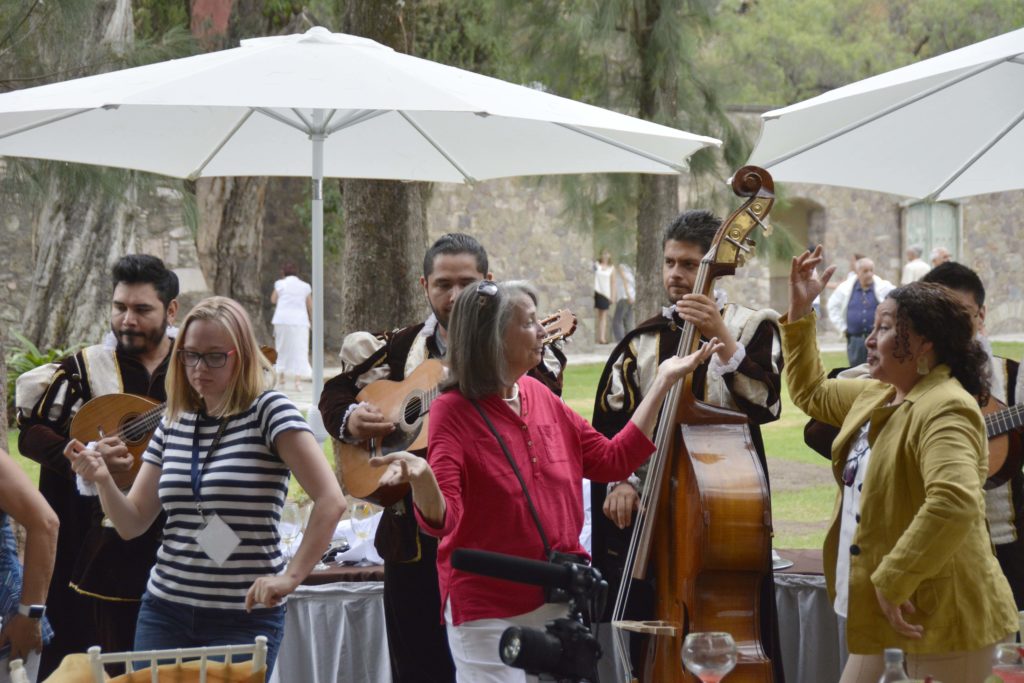 A tasty lunch was provided in the lovely garden courtyard of the Hacienda San Matias. While enjoying lunch, the group was serenaded by a group of estudiantinas. Ashlanders enjoyed singing and dancing to the music; shown in the photo are Sophia Miller (SOU student and videographer), Kathryn Thalden (who together with her husband Barry sponsored the murals that were painted in both cities), and Susana Montalvo (SOU alum and former president of the Ashland Amigo Club—now back in Guanajuato). [Photo by Jay Ach.] 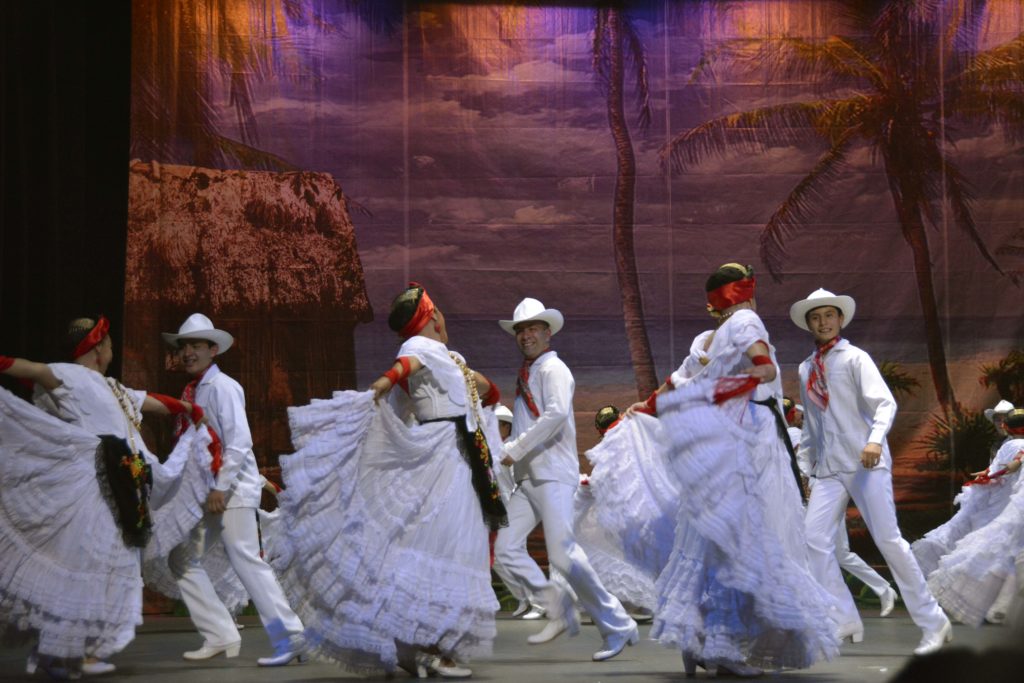 Yet more musical entertainment was provided by the University of Guanajuato’s Folklorico Ballet troupe at Teatro Juarez. This stellar group rotated among many changes of background scenery and costume changes. Every move was “spot on”. 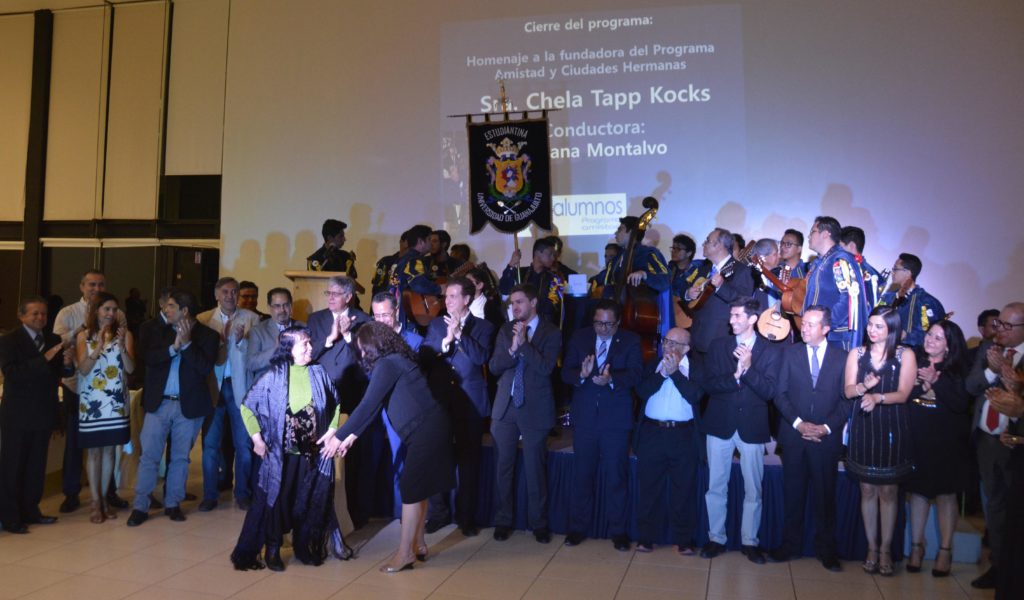 On Thursday, many Ashlanders spent the day in San Miguel de Allende, but returned to Guanajuato for another evening of food and entertainment. A percussion concert was performed by Terry Longshore and Ivan Manzanilla and their percussion ensembles from SOU and the University of Guanajuato. The concert was followed by a first-class dinner, followed by awards and dancing, at the University of Guanajuato’s DCEA campus. The evening honored Señora Chela, founder of the Amistad Program at SOU, and “ex-alumnos”, Guanajuato students who studied at SOU through the Amistad Program. Shown are some of the hundreds of Mexican students who have studied in Ashland over the past 50 years. One of the former students, Susana Montalvo, was the Master of Ceremonies. [Photo by Jay Ach.] 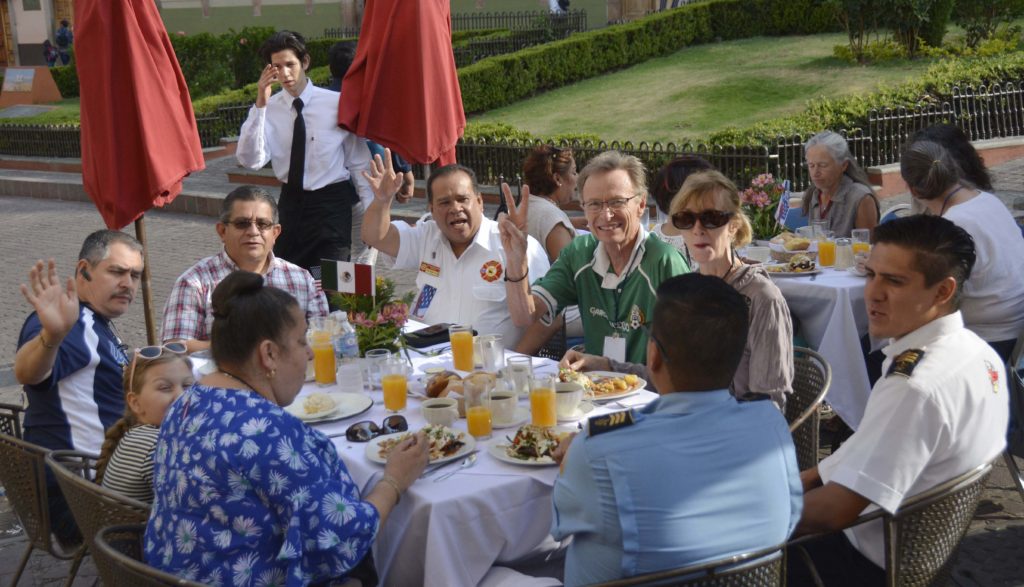 The connection between Amigo Clubs is another important link within the sister-city relationship. On Friday morning, the Amigo Club of Guanajuato hosted Ashlanders for a breakfast in La Plaza de la Paz. Shown here are Amigo Club members Tom and Lynn Lamoree, and Ramiro, Beatriz, and Yaxcelena Padilla (owners of Ashland’s El Tapatio Restaurant), together with three Guanajuato firefighters and Juan Carlos Delgado, former Guanajuato city councilor and long-time friend of Ashlanders. [Photo by Jay Ach.] 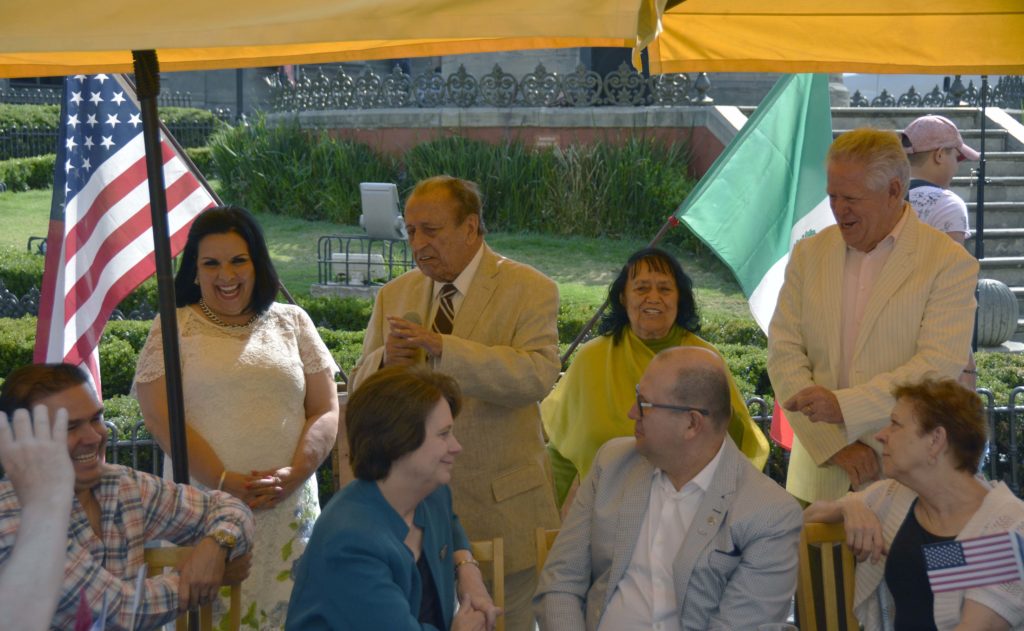 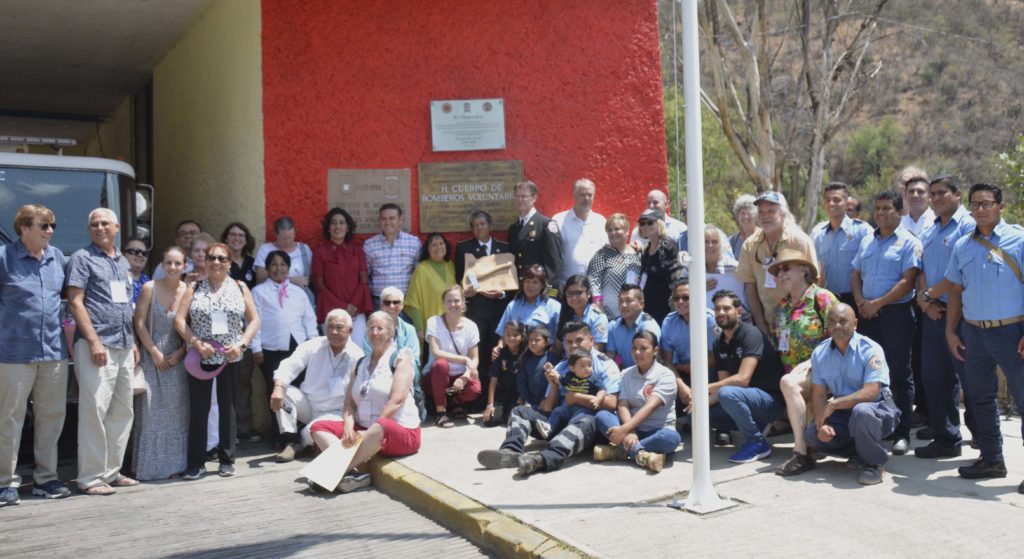 One more photo of the Ashland group, this time with Guanajuato firefighters in front of their station with a new plaque honoring the 50 years of sister-city relationship. The firefighters have had many exchanges over the years; we were all looking out toward a fire truck that was donated to them by the city of Ashland. In Guanajuato, firefighters donate their time and funds are in short supply.

In Ashland, we are eagerly awaiting the next sister-city event—when representatives from Guanajuato arrive to celebrate our Independence Day over the July 4 holiday.